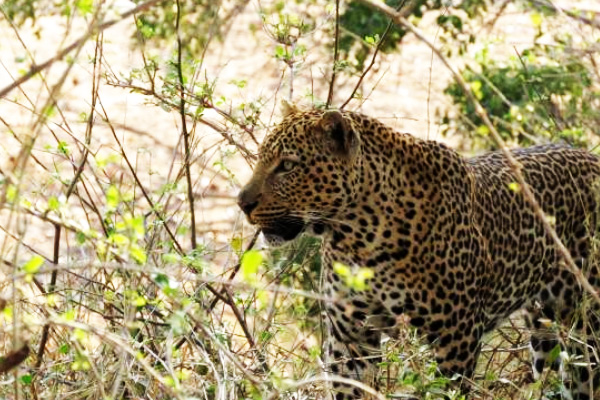 Welcome to another edition of our monthly newsletter from our beautiful concession in the Kruger National park. It has been an interesting month here on the concession and we have had some amazing sightings leaving guests speechless at some of the things they have witnessed on their safaris. The beauty of safari in the Kruger is first the beautiful scenery we are blessed with and the diversity of wildlife which changes on a daily basis as new animals appear and the status quo may change and any given time. During this month we discovered that the total number of Lions in the Hamiltons pride stands at 23 lions, this was a sight to behold to see all 23 altogether. We were lucky enough one night to see them start to hunt the bush was thick and as protocol goes we turned off all lights. After about 10 minutes of listening in anticipation we suddenly heard what sounded like a bulldozer going through the bushes, branches being snapped and trees knocked over. Then out of nowhere a big Buffalo came bursting through the bushes in front of us at top speed and disappeared into the night. We thought that’s it they missed. Then we heard the unmistakable sound of a Buffalo distress calling and lions growling, as it fell silent we slowly made our way through the thick bush to find 16 Lions on a large Buffalo all fighting for their share. It is a once in a lifetime sighting and the guests where left speechless by the whole experience. This was definitely one of the main highlights of the month among many other different and special experiences throughout the month.

Lions
As above this was an amazing month as far as these large carnivores were concerned. We saw the Imbali pride numerous times and the seven sub adults are looking good and healthy and getting larger by the day these three females are proving that they have what it takes to raise a pride successfully. The two Matimba males have been spotted on three occasions with some new battle scars, as they are nomadic and do not have a territory they need to be careful when moving about. They also need to stay out of the way of other dominant males whose territory they may be trespassing on. The Hamiltons pride amazed us this month as nobody was sure how many where in the pride until the night of the Buffalo when we saw them the following morning numbering 23 Lions in total. It was truly wonderful to behold, and so a new chapter begins in this pride and we will keep updating all our followers on their progress and happenings.

Leopard
With the numerous Lion sightings this last month it was no surprise that our Leopards kept a low profile and made it hard to find as they would not want to be on the receiving end of a Lioness defending her cubs. We did however have some good sightings of these elusive cats. We found our resident male Wabayiswa further south than we have ever seen him before patrolling and scent marking as he walked along the riverbank. Thsidulu his offspring was seen a couple of times around Hamiltons area also out on the prowl for any nearby game. Later in the month we had a male and female Leopard moving along the Nwatsinsonsto river bed it was getting dark and the terrain was difficult so we are unsure if they were siblings or a mating pair. As we are at the height of our dry season there have being multiple sightings of Leopards at the waterholes in front of the lodges while guests are enjoying their supper.

Cheetah
This was another month where guests got to see some spectacular sightings of these beautiful cats. The total population in the park is estimated to be around 300 in the 2 000 000 hectares we call home, so if you are lucky enough to see one you can consider yourselves extremely lucky. One of our vehicles was in the right place at the right time and found the two male Cheetah who frequent our southern boundary stalking some Impala and in a burst of blinding speed they caught their prize much to the disbelief of the guests as to how quickly they move. We also had a sighting of a lone male also on an Impala kill and another female off to the western boundary of the concession. 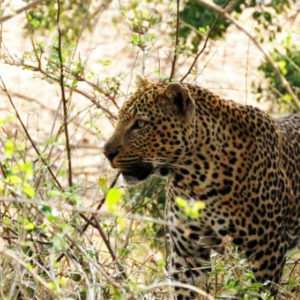 Out on patrol on the riverbank.

Wild Dogs
The last month was a bit quite on the Wild Dog front we did have some sightings of the Imbali pack as they moved through the concession on three different occasions. We did not see the pack around Hamiltons at all and after speaking to the researchers it appears they moved further north. As the seasons change so will their movements and we hope we will be seeing them more frequently after the first rains come and all the Impala herds start to calf.

Elephant and Buffalo
Elephants are everywhere on concession and as it is the height of the dry season they are causing quite a bit of destruction to the vegetation as they go in search of the bark and roots of the trees as this is where the best nutrients are as soon as the first rains come and the bush transforms into the lush green they will focus on the new grasses shooting up everywhere. As for the Buffalo we are still only seeing small groups of Dagga boys who frequent the waterholes and one small breeding herd moving about between the lodges.

Birds
The birdlife on concession is starting to change as some of the migratory birds starting to return such as Wahlberg’s eagle and here and there some of the Cuckoos have being heard on different parts of the concession. In the following months more and more will return and start to look for mates for the summer and the bush will be alive with the chorus of all the wonderful songs.

The concession is a very special place and leaves fond memories all our guests hearts and souls. And as an old saying goes you can wash the African dirt from your feet but not from the impression it leaves on your soul.