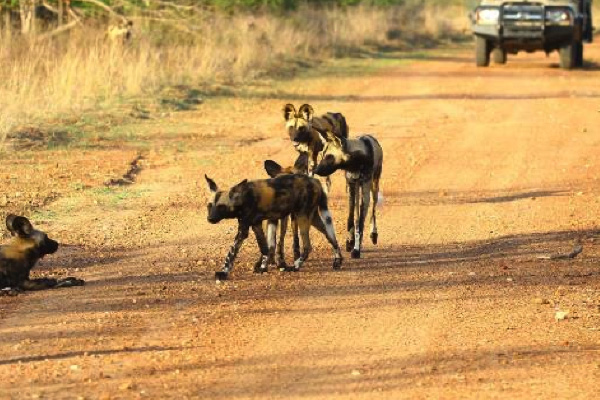 Welcome one and all to another account of all the happenings on the beautiful Mluwati concession in the Kruger National park. It has been another exciting month of extraordinary sightings for all of our guests. From the first-time safari goers to those who have been in this wonderful part of the world before. As we await the summer rains to kick-start the growing season, grasses and trees have burst into life bringing new food and nutrients to all the herbivores and all the new Impala lambs, which now abound everywhere. It was very hot this month with temperatures going into the 40’s a couple of times. However, this did not affect the magical sightings we had during the month. We have had many unknown Lions all over the concession and we can only but assume there has been another pride taken over somewhere and these Lions are now nomadic. This is common practise in Lions as the males get around 3 to 4 years old they are chased away to go find their own territory. So, during this time they become nomadic and stay away from dominant males and prides until; the time is right for them to claim an area or pride of their own.

As stated above it was a month of surprises in the Lion department and with all the new faces we could hardly keep up with the identification of the individuals on the property. We found three nice big males just coming into their prime one morning patrolling close to one of the lodges and after some research found they came from an area to the far north east of us, so we can only assume they where chased out by other dominant males. We also had a strange sighting of 7 sub adult males and females all varying ages who just appeared out of nowhere. Our Imbali pride was seen a couple of times and the sub-adults are getting bigger by the day. The Hamiltons pride appears to have split up for a while but when they are together they now number 23 individuals. In the coming months it will be interesting to see how the dynamics of the Lion population might change if some of these new arrivals stick around.

It was a good month for sightings of these beautiful cats always high up on the list of what all our guests want to see. It would seem that Wabayiza, our dominant male around Hamiltons has not yet chased off Shidulu, his son. We had an amazing sighting of both Leopards on an Impala kill high up in a Marula tree with the usual entourage of Hyenas waiting at the bottom in the vain hope that the kill might fall out the tree so they could scavenge the scraps. With the lack of rain there have been numerous sightings of the dominant female, Fihla at Imbali waterhole. We also had two different sightings of Nkanye around Hamiltons and we suspect that she will be having cubs soon. The unknown big Male that we have seen around Big Pan made a couple of appearances but he is still not very relaxed with the vehicles. He is entering Wabayiza’s territory and it will be interesting to see if there will be a showdown between the two.

This master of speed is always a special sighting and always gets everyone, including the guides excited. We had two sightings of the males that normally patrol our southern boundary. Also, the female that frequents our northern section was spotted around Imbali lodge and the waterhole. She was looking heavily pregnant then a couple of weeks later we found her again with fresh suckle marks which is a clear indication she has had her cubs. She will keep them hidden for at least 4 – 6 weeks before they will start following her around. We have seen her twice since then, in the same area, so her cubs must be stashed close by. We wait in eager anticipation to get a first glimpse of them when they are old enough to move around with her.

This month we had regular sightings of a pack of four dogs, whom we believe have split away from the Imbali Pack. It is not uncommon for wild dog packs to split up, especially when the pack is growing. As with other social canines like wolves, the urge to reproduce becomes so strong that both male and female members split away from their maternal pack. Inside a stable pack only the Alpha male and female will breed, which means that dogs that want to reproduce have to move away from the pack. This is vital for the survival of the species as it ensures that new genes are introduced into the breeding pool. With wild dogs being critically endangered, it is a privilege to witness the natural selection that this vast wilderness allows.

It was a good month as we saw the annual return of various large buffalo herds into the concession looking for good grazing, which is plentiful on the concession in the wet season. Buffalo play an important role in the eco system of the Kruger National Park, enriching the open grassland areas as their heavy hooves plough up the soil and their nutrient rich dung fertilize the soil. Elephants are another high impact herbivore and they were sighted all over the concession. Small and large breeding herds with youngsters and one of the biggest Tuskers we have seen in this area. He is truly a magnificent elephant to behold and is always a crowd pleaser.

The birdlife is teaming on the concession and as we witness the return of our migratory birds there is a host of activity as they all jostle for the best nesting sites. The seasonal breeders are all competing fiercely for mates and territory. All the Cuckoos are back and looking for their respective host species who’s nest they lay their eggs in. We witnessed two Jacobin Cuckoos evacuating two Black Eyed Bulbuls from their nest right in front of Imbali lodge. They will lay their eggs in the Bulbul nest and the Bulbus will unwittingly rear their young, who will often out-compete their adopted siblings. Just another way that nature has made sure that all species survive, albeit a little unfair.

As we head into the festive season we wish all of our guests, past and present many happy holidays and for those joining us in this special season, many extraordinary moments in this great wilderness which is the Kruger National Park. 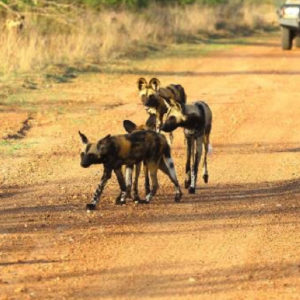